Paul Allen, Vice President of R.C. Hatton, was recently featured on the blog for “The Sugar Association.” Discussing “The Business of Farming,” the blog post tells a bit of Paul’s story & why he answered the calling to pursue a career in agriculture. Of course, we certainly are thankful he did! Check out the full article below. 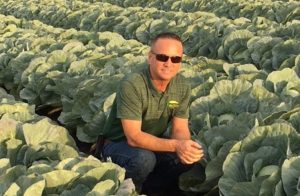 Paul wants people to understand the important role farmers play in their lives. Farming is not simply a job; it’s a calling.

As most farmers will tell you, you’re either a farmer or you’re not. Farming is not simply a job; it’s a calling, just like wanting to be a doctor or a police officer. You need to have that voice inside pushing you forward, and even then, there is no guarantee of success.

“Farming is a tough profession, but farmers are a tough group,” says Paul Allen, vice president of RC Hatton, which operates farms in Florida and Georgia. Growing up in a farming family and knowing full well the challenges, Paul still chose to answer that calling.

The Business of Farming

The summer after high school Paul began working for Roger Hatton, whose family has been farming in south Florida since 1932. After studying business in college, he joined full-time and worked with Roger to grow the operation, learning about the hands-on side of farming. Paul and Roger eventually became business partners with the families sharing equal parts ownership of RC Hatton. Today, Roger, 74, has handed daily management to Paul, 54. Paul’s son Johnathan, 34, is the next generation to be involved in running the farms, producing sugar cane, corn, green beans, and cabbage.

Aware of the importance of diversification, RC Hatton owns a vegetable packaging company, making them vertically integrated on their corn and green beans products. They also own nine NAPA auto parts stores and invested in Tellus, a company that makes packaging and foodservice table wear from sugar cane bagasse – the dry fibrous residue left over from cane processing.

Sugar cane is about one-third of RC Hatton’s crop by acreage, but according to Paul, it plays an outsized role in keeping the fields healthy and productive. Of their 12,000 acres, 4,500 is sugarcane – all located in Florida.

Essentially a large grass, sugar cane does not have to be tilled like other crops, uses less fertilizer and fewer pesticides. Cane fields also suffer less erosion and wind damage than vegetables.

When sugar cane is planted, the crop is farmed for an average of 3-4 years. The field is then switched over to vegetables for 1-2 years, and the cycle repeats. As Paul noted, because the cane is cut during harvest, but the land is essentially idle, the soil rests for up to three years. In fact, the first vegetable harvest after a switch-over from sugar cane tends to be especially strong, which is attributed to the rich, renewed soil.

Sugar cane is also a very low-waste crop. After the sucrose-containing juice is extracted the bagasse is either returned to the field or used to produce a variety of pulp-based products. The “mill mud” – dirt and field mud brought in with the sugar cane at harvest – is collected and also returned to the field. Both these practices help to maintain the health and productivity of the farmland.

Paul wants people to understand the important role farmers play in their lives. He often points out that during World War II, farmers were exempt from the draft because the U.S. government considered farming a matter of national security.

“To put in perspective,” he says, “You may need your doctor two or three times a year, and a lawyer – if you’re lucky – once or twice a year. But, you need a farmer three times a day.”

Our mission is to produce and package the best products possible, while providing a safe, clean working environment for our highly valued employees.  Read More

Our mission is to produce and package the best products possible, while providing a safe, clean working environment for our highly valued employees.